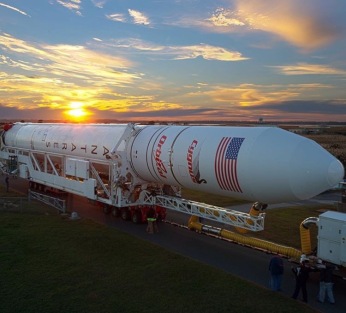 Journalists For Space has been granted behind the scenes access to the Orbital ATK Antares Return to Flight launch at NASA Wallops Flight Facility.

The Orbital ATK launch will be the company’s first space mission since 2014 when an anomaly caused the rocket to explode shortly after lift-off. The OA-5 Commercial Resupply Mission will be Orbital ATK’s sixth cargo resupply mission contracted with NASA.

The Cygnus spacecraft will deliver approximately 5,000lbs of experiments and supplies to astronauts aboard the International Space Station (ISS). Once the spacecraft reaches the ISS, the Canadarm2 robotic arm, Mobile Servicing System (MSS), will be used to dock the spacecraft with the space station. After the crew unloads the supplies and experiments, they will re-fill the empty cargo module with waste for disposal, as it will be destroyed during reentry into Earth’s atmosphere after leaving the ISS.

The Antares rocket was successfully rolled out to the launch Pad-0A, Thursday, Oct. 13, 2016.

If you live on the East Coast check out the launch radius below to see if you will be able to spot the Antares rocket on Sunday.

Keep up with the Antares Return to Launch, behind the scenes coverage and other space-related content at Journalists For Space.

Enjoy this article? Help support the writer by donating below!